It's been quiet in January, but I still managed to hit 2 sales. One was a collector's sale with the usual array of stamps, postcards, coins. I did end up buying quite a lot of French epiphany feves. I realised just recently that they do sell and not just to French collectors. I sold quite a few nativity pieces before Christmas as well as some themed ones. So from now on I'll buy them if I find pieces that can appeal to collectors and if the price is right.

What are these "feves" you ask? The feve (broad bean) is a little figurine (usually porcelain, sometimes plastic) hidden in the French epiphany cakes (King cake). "Tradition holds that the cake is “to draw the kings” to the Epiphany. A figurine, la fève, which can represent anything from a car to a cartoon character, is hidden in the cake and the person who finds the trinket in his or her slice becomes king for the day and will have to offer the next cake. Originally, la fève was literally a broad bean (fève), but it was replaced in 1870 by a variety of figurines out of porcelain or—more recently—plastic. These figurines have become popular collectibles and can often be bought separately. Individual bakeries may offer a specialized line of fèves depicting diverse themes from great works of art to classic movie stars and popular cartoon characters." (cf: King Cake article on Wikipedia)

You can see some French Feves here:


I also went to an indoor community sale and bought a few playmobil and Littlest Pet Shop. Not a big profit, but I have good success selling Playmobil, either as custom sets or for replacement parts. Also bought a stunning necklace, heavy and beautiful, by Scooter Paris. I'll list it on ebay or Etsy.

And last, yesterday I went to a charity shop and score two nice vintage bed sheets... you'll have to wait until a bit, I'll take some pics and show later this week in a new post . Also looking forward to hit a few sales over the weekend! 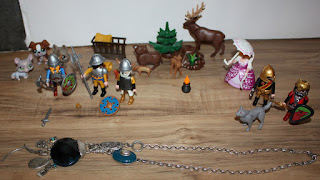 Posted by vartinnaa at 4:34 AM